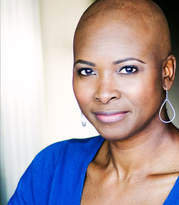 BETTY HART
Betty is thrilled to be returning to STORIES ON STAGE where she read in 2014 and 2015.  By day, she is the lead facilitator with the Experiential Learning Team for Kaiser Permanente’s Arts Integrated Resources department.  In spring of 2016, Betty had the pleasure of starring in THE MOUNTAINTOP at the Arvada Center, for which she was nominated for a Henry Award for Outstanding Actress in a play. Betty made her Denver theatre debut in spring of 2014 in Curious Theatre Company’s production of GOOD PEOPLE, for which she won the 2014 Marlowe Award for outstanding actress in a supporting role-comedy.   Also in 2014, Betty appeared as Erzulie, Goddess of Love, in Aurora Fox’s production of ONCE ON THIS ISLAND.  Betty has done readings for Local, square product theatre, and the Historic Elitch Theatre’s New Play Festival.  She is represented by Radical Artists Agency.  She is a member of Actor’s Equity Association & the proud Mom of Mocha, her beloved dog.

With Stories on Stage
On The Couch:  November 11 (Denver)
Thank you to all of our Season Sponsors & Partners