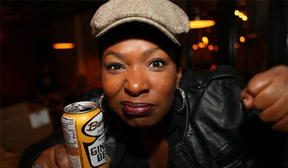 ​Janae Burris
Janae Burris is a comedian, writer and actor as well as a graduate of California Institute of the Arts, School of Theater. While in Los Angeles Janae performed in dozens of stage plays and  was a member of the critically acclaimed City Garage Theater. She has performed and taught improv and stand up comedy for almost a decade, but in the last eighteen months has become a staple in the densely talented Denver comedy community. Janae grabbed the runner up spot at the 2015 Comedy Works New Faces Contest. Her recent promotion to "Regular" at CW has given her the opportunity to open and feature for some of the nation's funniest comedians including Ben Roy, Josh Blue and The Sklar Brothers. Janae can be seen weekly performing at both Comedy Works Denver locations and throughout the front range. Follow her on Twitter and Instagram @negativenegro.
Thank you to all of our Season Sponsors & Partners