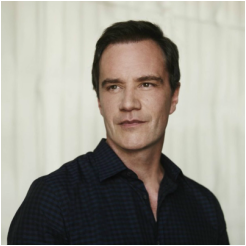 Tim DeKay
Mr. DeKay states that many of his best memories were of his busy time at The Firehouse (a converted firehouse turned theater) either putting on plays, helping build sets, tearing down sets, etc. Following graduation, Tim was employed by the Marcellus Casket Co. in Syracuse, New York. He assumed he was on the right track for business or law, until the call of the theater became undeniable. After a few courses in directing at Syracuse University, Tim headed to Rutgers University where a strong Masters Program in Acting awaited. In addition to receiving his M.F.A, Tim was fortunate to meet his wife, actress Elisa Taylor. They were assigned as scene partners on the first day of grad school! Tim currently lives in California with his wife and their two children.