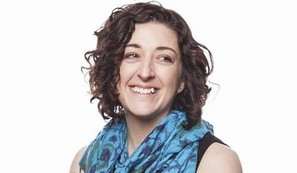 Timmi Lasley
​A constant promoter of the Denver independent comedy scene, Timmi Lasley is the host of Epilogue Comedy - a kickass showcase in a punk rock book store. She was the winner of Comedy Works Funny Final Four competition in 2015, which gave her the opportunity to share the stage co-hosting at Comedy Works with Dave Chappelle. Dave was heard to say "B**** can DANCE!*" both on and off the mic that night, which - though not technically a credit - has been the highlight of her career thus far.  (*It should be noted he did not mean her actual dancing skills, but was nodding to her comedic prowess.)

​Festival credits include High Plains Comedy Fest 2013, '14, and '15, as well as the Underground Music Showcase and CROM Fest 2015. She has become an accomplished storyteller and can be seen hosting Denver's Moth Story Slam, or writing and producing original plays.
Thank you to all of our Season Sponsors & Partners